SUMMARY AND KEY TAKEAWAYS OF THE ABLI-HCCH 1 JUNE WEBINAR

Here are the summary and key takeaways of the webinar co-hosted by the Asian Business Law Institute and the Permanent Bureau of the Hague Conference on Private International Law on 1 June. 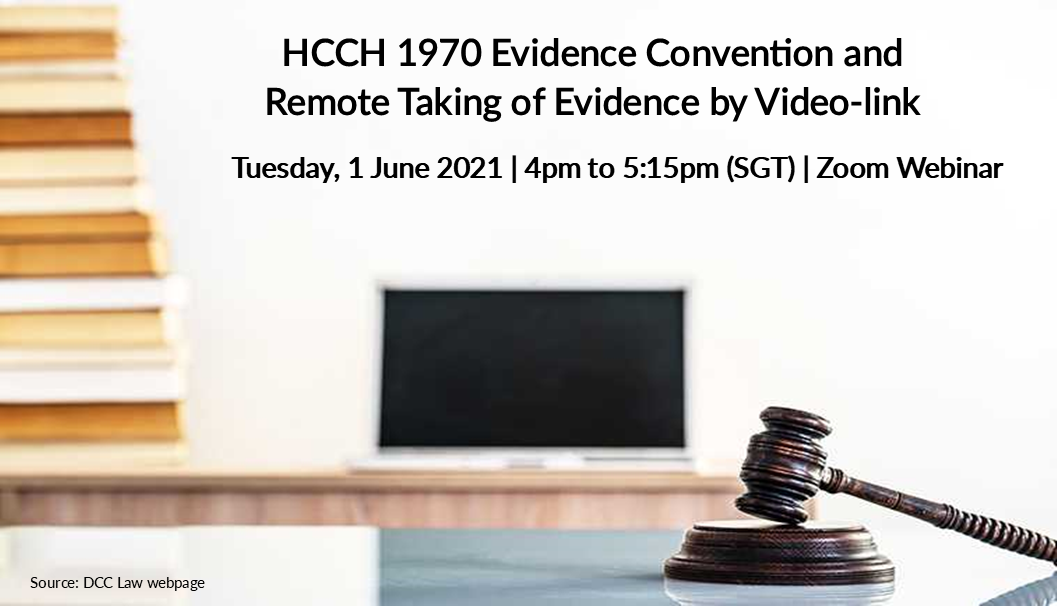 BY ABLI AND THE PERMANENT BUREAU OF THE HCCH

Dr Christophe Bernasconi, Secretary General of the HCCH, opened the webinar with a welcoming address where he underscored that the success of the 1970 Evidence Convention was attributable to not only its simplified transmission procedures and its flexibility to accommodate the needs of different legal traditions, but also the technology-neutral approach adopted by drafters, which has allowed the Convention to remain fit for purpose in the 21st century. Specifically, Dr Bernasconi highlighted that the Convention, with 63 Contracting Parties representing every major legal tradition, facilitated the transmission of thousands of requests for taking of evidence every year and allowed the use of video-link technology in the taking of evidence abroad.

Professor Yun Zhao, Representative of the HCCH Regional Office for Asia and the Pacific, was next to speak where he gave an overview of the operation of the Evidence Convention. He explained how the Convention provided, in Chapter I, a main channel of transmission under which a judicial authority in a requesting State may send a Letter of Request directly to a Central Authority in the requested State, before elaborating that the Convention also provided, in Chapter II, a streamlined process for the direct taking of evidence by commissioners or consuls, to which Contracting Parties may object upon or after accession. Professor Zhao pointed to the recently published Guide to Good Practice on the Use of Video-Link under the 1970 Evidence Convention and outlined a plethora of ways in which video-link technology may be used to take evidence abroad, e.g. to facilitate the presence of the parties and their representatives by video-link at the execution of a request or to permit a commissioner located in the State of Origin to take evidence by video-link in the State of Execution.

Following Professor Zhao's presentation, Mr Alexander Blumrosen, Partner at Polaris Law (Paris), provided a historical account of the use of the Evidence Convention in the United States and the significance of the landmark Supreme Court decision Aérospatiale. He went on to explain in detail, and by reference to his practical experience, how evidence located in France but needed for U.S. civil or commercial proceedings may be taken through a Letter of Request (under Chapter I) or more swiftly through a commissioner (under Chapter II). Mr Blumrosen highlighted that the execution of a Chapter I Letter of Request in France usually took between six weeks and three months, and that under Article 9 of the Convention, foreign counsel may be allowed to participate in the direct or cross examination of witnesses by video-link provided that such participation was expressly requested in the Letter of Request and allowed by local law and practice as it is in France. Mentioning that the taking of evidence by commissioner under Chapter II could be even faster and more flexible, Mr Blumrosen added that once the Central Authority had authorized a commissioner - which could take between one to ten days, depending on the matter - the evidence may be taken immediately either in person in conference room facilities or using video-link, without needing any further intervention or participation by a local judge. He mentioned the increased use of Chapter II discovery in requests from the U.S. over the last ten years, and applauded the qualified Article 23 reservation adopted by France to the Convention that allows for pre-trial discovery but requires requests to be "enumerated limitatively" and to be relevant to the underlying dispute in order to avoid overly broad "fishing expeditions".

Turning attendees' attention from France to Singapore was Mr Edmund Kronenburg, Managing Partner of Braddell Brothers LLP, who presented a brief overview of the operation of the Evidence Convention in Singapore by looking at the country’s legal framework. In his view, the popularity of the Convention was likely to increase in the coming years in tandem with Singapore's efforts to reinforce its dispute resolution hub status. Mr Kronenburg then moderated a lively panel discussion among all panelists, including Mr Blumrosen, Justice Anselmo Reyes of the Singapore International Commercial Court, Dr João Ribeiro-Bidaoui, First Secretary at the HCCH and Professor Zhao. Key takeaways of the panel discussion are provided in the appendix.

To conclude the session, Dr Ribeiro-Bidaoui spoke of the salient benefits and main features of another HCCH instrument, the 1965 Service Convention, highlighting that the Service Convention, with 78 Contracting Parties, was accessible to almost 70% of the global citizenship who represents more than 80% of the world's GDP.​

The Permanent Bureau of the HCCH and ABLI are heartened by the positive feedback received after the webinar. Some Singaporean practitioners who were in the midst of preparing for virtual hearings found the session especially timely. One attendee from the business community commented that although not legally trained, he found the discussions useful in understanding the difficulties involved in multi-jurisdictional legal processes from the perspective of running a multinational business. Attendees joining from outside of Singapore said they benefited most from learning about the implementation of the Evidence Convention in places other than their home jurisdictions. Specifically, Matthijs Kuijpers and Sofja Goldstein from Amsterdam-based law firm Stibbe shared that they found it extremely valuable for their international litigation practice to have judges, practitioners and academics from various jurisdictions exchange and discuss experiences and best practices. In particular, they very much appreciated that the organisers actively engaged practitioners during the session as such engagement helped overcome issues that would inevitably rise over time given that the methods of taking evidence today differ significantly from how it was envisioned when the Convention was drafted.

The organisers thank all attendees for their active participation and warm reception and look forward to having more such opportunities for exchange of ideas and sharing of experiences.

Those who are interested in viewing the full recording may contact ABLI's secretariat at [email protected] for more details.

May the Evidence Convention be used in aid of arbitration proceedings?

Justice Reyes mentioned that Chapter II was of little assistance given the largely voluntary nature of arbitration. Professor Zhao added that parties could rely on courts to seek assistance in arbitration proceedings in instances where a witness was not willing to cooperate. Mr Blumrosen indicated that Chapter II could be used even if evidence is given voluntarily in arbitration, where compliance with an international treaty is required by an applicable Blocking Statute. In particular, the French blocking statute prohibits discovery in aid of judicial and administrative proceedings only, and therefore is not needed in arbitration as long as domestic laws allow discovery in support of arbitration.

Does the Evidence Convention have to be used when a witness is willing to give evidence by video-link in Singapore International Commercial Court (SICC) proceedings?

Justice Reyes explained that the current practice of the SICC in dealing with a witness based offshore who is willing to provide evidence was to require the parties to ensure that any domestic laws in relation to the witness giving evidence are complied with, and that the parties certify or furnish evidence to that effect.

His Honour added that pursuant to Article 17 of the Convention, any person, including a judge, may be duly appointed as commissioner to take evidence abroad, provided that the competent authority in the State in which the witness is located grants its permission.

His Honour then suggested that international commercial courts, such as the SICC or the China International Commercial Court, could sign a Memorandum of Understanding (MoU) to grant permission for the taking of evidence by video-link from willing witnesses located in their jurisdictions. He also drew attention to the possibility of compelling a witness under Article 18 of the Convention.

Mr Blumrosen seconded the MoU suggestion but added that if a willing witness was located in France, the French blocking statute would still require that any request be channeled through the French Central Authority, and that this point should always be borne in mind. Justice Reyes expressed the view that, based on the text of the blocking statute, an MoU would seem to fall under the exception provided by the law (i.e. that evidence has to be taken under the umbrella of a treaty or laws and regulations in force).

Justice Reyes also recalled the usefulness of Chapter II of the Convention (in particular for non-common law jurisdictions) and proposed that some countries in the region, such as China, Singapore and Vietnam, revisit their declarations in respect to Chapter II to further facilitate the taking of evidence abroad through the use of commissioners. Professor Zhao echoed this recommendation, adding that the withdrawal or amendment of declarations could be achieved, inter alia, by organising training sessions or enhancing capacity-building in the Asia-Pacific region.

Justice Reyes suggested that in order to swiftly provide further clarity without waiting for the 2023 Special Commission, a meeting of interested stakeholders within Asia could be convened with a view to exploring the possibility of signing a protocol or a standard/template MoU that would allow international commercial courts to function more efficiently. Such an instrument could also serve to clarify the positions of Contracting Parties in relation to arbitration and the use of technology. Dr Ribeiro-Bidaoui expressed hesitation as to whether an MoU or protocol was necessary or whether the Convention was enough (in which case further debates at the Special Commission would suffice).

In practical terms, how does one take evidence remotely? And which is more popular, the direct or the indirect taking of evidence?

Mr Blumrosen explained that, in his experience with incoming U.S. discovery requests, the discovery process was delegated to the party's counsel by the U.S. Court, which meant that counsel was in charge of all arrangements. Once authorisation was obtained from the French Central Authority, the deposition could be organised by the parties as it was done in the U.S. The parties usually agreed in advance on the details, and traditionally counsel preferred to be in the same room with the witness, although recently depositions had been done by video-link without any problem.

Justice Reyes was of the view that the court may appoint itself to take evidence by video-link, and hence evidence could be taken in as little as one day. The parties could also agree in advance on a video protocol when conducting the hearing so that the conduct of proceedings was agreed by all. Mr Kronenburg queried whether the court, in taking the evidence itself, might blur the lines between civil (inquisitorial) and common law (adversarial) systems.  Justice Reyes clarified that the court, in taking the evidence, need not do so by asking the questions of the witness itself - it could instead have counsel examine and cross-examine the witness, as was usual in the common-law adversarial process. The questions may be posed by counsel, but the evidence is still taken by the court.

What are some of the reasons why the majority of the Association of Southeast Asian Nations member states have not joined the Evidence Convention and what are the Convention's benefits?

Justice Reyes pondered that some of these countries might have concerns over U.S. discovery proceedings, which could, in fact, be easily overcome by making a declaration under Article 23 of the Convention which prevents the execution of Letters of Requests for the purposes of pre-trial discovery.

Mr Blumrosen added that the greatest benefit of the Convention was its flexibility to accommodate different domestic regimes.

Professor Zhao mentioned that internal legal obstacles might be one reason, which could be overcome by further promotion and capacity building activities in the region. He stressed that, apart from flexibility, one significant advantage of the Convention was that accession to the Convention afforded Contracting Parties access to a wide network, as opposed to negotiating individual bilateral instruments.