In our oral history programme, we have the privilege of speaking to some of the best trial lawyers in Singapore. When asked to recall their most memorable cases, it is often not surprising to hear that these are not their headline trials but occasions where they manage to uncover a gem of evidence that turned the tide in their favour. 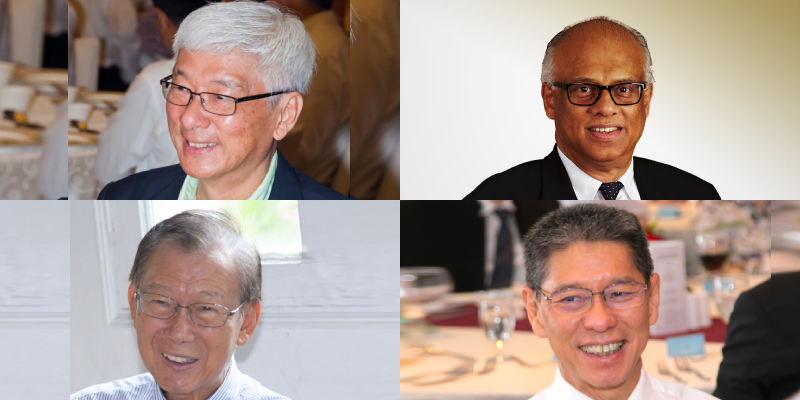 “I remember this was before [Richard] Magnus who was then a Magistrate… Magnus asked, ‘What is your defence, Mr Wong?’ I said, ‘Two-fold, Your Honour. One is we haven’t seen the tapes yet so obviously, we deny they are blue and secondly, my clients deny he was in possession.’

“I remember Magnus tracing his finger, tap, tap, tap on the front of his desk… and he told the clerk to arrange for us to view the 16 reels of film at the film censors’ auditorium. So, for two Saturdays, we watched the movies, and it was as blue as anything could be. My first experience of blue movies.”

At the trial, the last witness to testify was a young investigating officer. Mr Wong recalled, “While he was giving his evidence, I suddenly noticed that instead of two paper bags on the table with the blue films, they were all in one big plastic bag. So, after the IO had given his evidence, I did something which all of us had been told never to do; do not ask a question which you don’t know what the answer is. But instinctively, I felt I could take a chance. And I said, ‘The police officer who seized the tapes said they were in two paper bags, can you please tell us why the tapes are now in one plastic bag?’

“Then it came out in a torrent. ‘Sir, when the tapes were brought to my office, all the officers rushed for all the tapes and then the paper bags were torn, and they took away all the tapes.’

“There was complete silence. The interpreter was trying not to laugh. And I remember I think I had a smile on my face. Magnus was trying to look very stern.

“So, Magnus looked at me, ‘Well, Mr Wong?’ I said, ‘No further questions, thank you very much, Your Honour.’ Then I sat down. Case dismissed.

Chelva Rajah SC not only remembers his first court case with alacrity, but he had also kept the evidence as a reminder of his victory. “It has been downhill since then,” he jokes.

Mr Tan Chin Hoo, the chief clerk at Tan, Rajah & Cheah had asked the young Chelva to help a friend who was charged under the Sale of Food Act. The item in question was a can of guava juice with a label, ‘Enrich with Vitamin C’.

The drink was a sample that the client had received from a supplier in Malaysia. Mr Rajah recalled, “He put this on display just to see whether it’s laku or not, whether people would buy it.” When inspectors from the then Food Department came, they found that the can was not properly labelled.

“Under the Sale of Food Act, whenever you say it’s got any vitamins in it, you have to say how many milligrams of vitamins per milligram of product, and it didn’t have that. It just said, ‘Enrich with Vitamin C’.

Mr Rajah had initially planned to make a representation to the Attorney-General’s Chambers to see if they would withdraw the charge. “As I was writing the representation...I realised, hey, maybe there’s a defence.   So I didn’t write the letter.”

“So my submission to the court was, ‘Your Honour, this can, there is nothing there that claims that there is Vitamin C put into this drink.  In fact, what is contained on the can are the words, ‘enrich with Vitamin C’.  In its ordinary meaning, it is an exhortation to the purchaser to enrich it with Vitamin C.  It didn’t say it’s been ‘enriched with Vitamin C.’ And the only authority I could use with the court was that words must be given their ordinary and natural meaning when you interpret, and this is exactly the opposite of what the prosecution is saying. And I got my acquittal at my first case and to me, it was my greatest forensic triumph.”

Giam Chin Toon SC recalled his assistant telling him, ‘I don’t see how you’re going to have a case...how you are going to fight?”

His client, a developer, had been sued by his architect for non-payment of fees following an abortive project in China.  The architect had tendered in evidence a stack of correspondence, building plans, paid and unpaid invoices spanning two to three years in support of his claim.

“My client claimed he had paid all outstanding fees and that the last two alleged unpaid invoices were never received by him.  The hearing was coming up shortly and I was wondering how to establish that the two alleged unpaid invoices were never received by nor sent to him.  One night, I could not sleep, thinking of the case. I took out the stack of correspondence and invoices (there might have been seven or eight of them) and laid them in sequence on the table.  They were all set out on printed letterheads of the plaintiff’s architect firm.”

Mr Giam’s client was adamant that he had received all the other documents but not the two alleged unpaid invoices.

“How do we show that he had not received them?  Can he be telling the truth?

“I kept looking at all the correspondence and the invoices placed side by side on the table.  The printed letterheads appeared to be exactly the same when I looked at them. Then, by chance, I noticed that the letterheads of the two disputed invoices, although looked identical with the other letterheads at a glance, actually had a different address postal code printed on them.  I decided to check when the postal code had been changed by the authorities.”

The next morning, Mr Giam requested his colleague who was assisting him on the case to check when the new postal code for Singapore was implemented.  It turned out that the existing postal code at the material time was changed well after the dates of the two disputed invoices.  The official government directory from where the information was obtained, was produced as proof of that in court.  It was clear that the alleged invoices could only have been issued after the change in the postal code was announced and not on the dates stated in the invoices.  These invoices were clearly backdated to show that the fees were incurred on those dates and had remained unpaid.  Mr Giam’s client was indeed telling the truth.

The architect had denied the allegation and tried to explain.  In court, he was asked how he would have known of the new postal code on his letterhead and had it printed out on his letterhead before the change had been announced by the authorities.  “To the credit of my opposing counsel, he forthwith withdrew his client’s claim and we settled the case amicably,” said Mr Giam.

THE READING ON THE GRAPH

In 1989, Ms Koh, a nurse with more than 20 years of experience would have lost her job should an inquiry panel find her negligent in administering an extra dose of a potent drug without checking with her doctor. The patient Mr Ho who was warded at Mount Elizabeth Hospital for psychotic depression slipped into a coma and died a few weeks later.

Mr Ho’s psychiatrist Dr Ang Peng Chye had prescribed five different sedatives, one of which was Sodium Amytal. When Mr Ho was behaving violently, Ms Koh gave him an additional dose of Sodium Amytal to calm him down.

Justice Choo Han Teck who was then practising at Allen & Gledhill represented the hospital at the coroner’s inquiry. Mr Ho’s family represented by Lee & Lee had sued the hospital, and Ms Koh had been charged by the AGC for causing the death of the patient.

Justice Choo recalled, “I went to the hospital and spent three days there... going through every document they had, page by page. There were thousands of pages of documents because the patient had been warded for about two months. I found a nursing chart which had a graph line going up and a second line going down and immediately I said, ‘This seems unusual.’ My instinct told me this is the one to follow up.”

Justice Choo sent a copy of the chart to an expert in London who explained that that the reading showed an abnormal heart rate and respiratory collapse had started long before the dose of Sodium Amytal was administered by the nurse.

At the trial, Justice Choo was asked by the District Judge if the nurse wanted to claim trial on a charge in which the maximum fine was only $500.

Justice Choo recalled, “So he said, ‘Do you want to fight this case? It’s only a $500 fine. Why are you fighting?’ I was telling myself, ‘Why did he think it this way?’ All the more reason we have to fight because if it is only $500, it’s worth fighting. And furthermore, if she was found guilty, she’ll be struck off. That would be the end of her nursing career.”

“So I planned my last question to him very carefully. I said, ‘So Professor Tsoi, can you tell this court in the light of what has happened, if this second dose of Sodium Amytal was not given, would it have made any difference?’ He said it would have made no difference. In other words, the guy was already gone. So I stopped. And once I got him to say that I was very happy because when Chao Tzee Cheng went in, I said to him, ‘You heard what Dr Tsoi said, do you disagree?’ He said, ‘No,’ and that was it. The nurse was acquitted. I wrote to Lee & Lee to withdraw the suit, which they did.”

The views and opinions expressed in these articles are those of the individual author/interviewee and do not represent the views of SAL Group or its subsidiaries.