The veteran litigators meet ahead of next month’s Sentencing Conference. 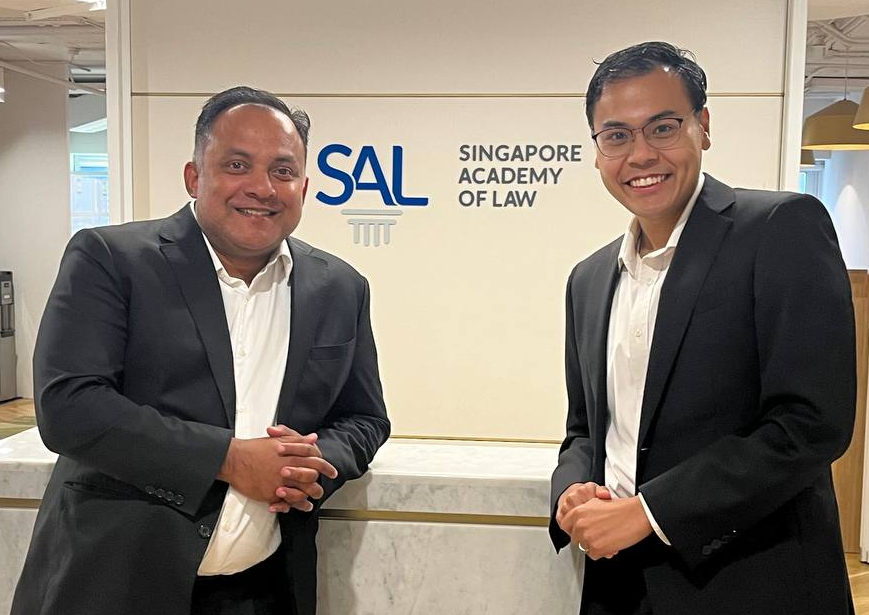 “The grass is greener on the other side” isn’t a saying that seems to apply to the world of litigation. When we ask top prosecutor Mr Mohamed Faizal SC and veteran of the Defence Bar Mr Chenthil Kumarasingam whether they can see themselves switching sides, they are both quick to shake their heads.

Chenthil’s resolve to remain a defence counsel comes despite the frustrations he faces at work. “Criminal work can be quite stressful because although you’re working very hard for deserving people, they may not always be able to pay. You’ve got to make up the time somewhere else,” says the partner at Withers KhattarWong, who also does civil work.

It’s a pressure that prosecutors like Faizal may not be used to—and something that he isn’t complaining about. “Being in Chambers, you can look at a case from a principled approach and do what you think is best for the case, instead of being guided by cost and client pressures. There’s an element of public service from being able to speak up for a victim.”

But Chenthil sees it slightly differently, saying, “I prefer the autonomy of being in private practice and not having to prosecute a case in which I had certain doubts.” His views on the workings of the AGC have been informed by two decades in the profession. “When I started in 2001, AGC was a blank wall. You couldn’t understand the process and why they did certain things. But things are changing: the system now encourages greater collaboration and it allows for both sides to try to get to the right outcome.”

Faizal, who has spent most of his career at AGC, attests to this evolving relationship as well. “Having a positive working relationship is a journey, not a destination. Given changes in the law and how we deal with cases, there are a lot more opportunities for collaboration,” he explains, pointing to developments like the Criminal Case Management System (CCMS), where both sides can meet to discuss cases.

Such meetings are not new; but in the past, counsel relied on the strength of personal relationships to organise them.  According to Chenthil, there was a time when he first started practice when those relationships were developed at the Civil Service Club or Samy’s at Dempsey on a Friday afternoon. While the platforms for interaction may have changed with time, that hasn’t stopped regular interactions between defence counsel and prosecutors. These days, counsel can apply to have a CCMS session through a fuss-free form on AGC’s website, or even just a phone call to the prosecutor in charge. “This allows for those conversations to happen if they need to happen, and not just if you happen to be friendly with your opponent. It creates a lot more transparency about where the defence’s case is, where the prosecution’s case is and to see if there’s a middle ground that all parties can come to,” reflects Faizal.

Both Faizal and Chenthil are relatively senior, so their daily work now includes mentoring younger colleagues. Managing the relationship with opposing counsel is a major aspect of this—and early meetings with the other side can set the tone for how the relationship will pan out.

Explains Chenthil, “Having the prosecution recognise that you are responsible and measured is important. Your conduct can affect your client’s outcome. I remind my juniors to push on the issues they need to push, but always give the other side a chance to talk to you. Don’t go out of your way to embarrass people because when you do that, you’re basically saying, ‘I’m willing to burn this relationship for this individual result.’ And that cannot be the way you practise.”

Faizal agrees, sharing his approach. “I do encourage them to talk openly to the defence—from experience, that often leads to better outcomes for all parties. But of course, the challenge is the workload, and the need to apply one’s mind to which cases would benefit from such discussions. But when we do meet, we often can come to a landing that works for all parties. The time of everybody involved is saved and it offers some relief for accused persons, as it provides them a certain level of certainty.”

These meetings have become a lot more focused since sentencing frameworks were introduced for specific types of crimes, among them sexual and hurt offences. In introducing the frameworks last year, Minister for Law and Home Affairs K Shanmugam SC stressed that they would be non-binding. Even so, they are a good starting point, says Faizal. “For them to be effective, both parties have to be flexible and agree that based on the case before them, you may calibrate downwards or upwards from where the framework points to as a starting point.”

That kind of flexibility and openness from both sides is vital as it preserves the relationship between prosecutors and defence counsel, which will arguably span the length of one’s career. As Faizal puts it, “Outcomes almost don’t matter. Whether you win or lose … it’s beside the point when it comes to the relationship between the parties. If you feel like you’ve presented all the evidence you have and if you feel like the defence has been fairly pushed on difficult points—as they should—then there’s no reason why that positive relationship cannot be preserved regardless of the result.”

Chenthil chimes in, “You want to be able to see that prosecutor or that defence counsel the next day or the next week and not have bad blood because of bad conduct. Fight as hard as you need to—but do it fairly.” Cheekily, he adds, “The only ‘fight’ we do have is on the football pitch, where the Defence Bar can continue beating the prosecution at football.” “Some things we don’t take personally … but football, we do,” laughs Faizal.

Faizal and Chenthil will speak at the upcoming Sentencing Conference, jointly organised by SAL and the State Courts, Singapore. They will join a panel moderated by Mr Victor Yeo, Principal District Judge (Criminal Courts) and will be joined by A/Prof Benny Tan (NUS) and District Judge Mr Kow Keng Siong. Register for the two-day conference here.