The Opening of Legal Year (OLY) is a ceremony steeped in tradition. And as this list shows, the speeches made there can have a big impact on the everyday practice of law.

Ms Phyllis Tan delivered the first-ever address from a female Law Society President in 1979. The Attorney-General that year was Mr Tan Boon Teik SC (left), seen here at an OLY reception that year with Chief Justice Wee Chong Jin.
Photo: Ministry of Information and the Arts Collection, courtesy of National Archives of Singapore

In her maiden speech as the first female to take charge as President of the Law Society, Ms Phyllis Tan advocated for lawyers to have at least three years of pupilage under a senior practitioner before qualifying for admission to the Singapore Bar. This was up from the six months that it was.

“It is the slow grind that produces the stable practitioner and a law degree should not be looked on in itself as a passport to fame and fortune…A sensitivity to professional and ethical issues will not only make him a better lawyer but also a better contributor to society."

The words sound confident but in reality, Ms Tan was anything but. In 2010, she recalled how nervous she had been, saying, "I held a piece of paper quivering in my hand which Chief Justice Wee Chong Jin noticed. and beckoned the court attendant to switch off the ceiling fan."

The launch of a new legal year in 1986 took twice as long as lawyers packed the Court of Appeal, standing at the back of the room and lining the passageway outside to hear the maiden speech of Mr Francis Seow, then the newly elected President of the Law Society, and the response of CJ Wee.

The courtroom witnessed a war of words between CJ Wee, who had helmed the judiciary for the past 23 years, and Mr Seow.

The latter began with an assertive plea for judges to show more respect to lawyers, failing which, he warned, there would come “a greater restlessness and a deepening gloom”. He insisted that lawyers “too often … encountered the insolence of office, the vicissitudes of temperament and tolerance” in court.

He also argued that the three arms of the law—the judiciary, law officers of the State and members of the Bar—are “an equal trinity”. “If we are not, the administration of justice cannot properly function”. Mr Seow’s speech was followed by vigorous applause, mainly from the younger lawyers present.

Media reports noted that CJ Wee remained unmoved and unimpressed by what he heard. “Though we may be a trinity, we are not an equal trinity. Whether or not an individual member of the Bar who appears before the Bench deserves the respect which he claims, depends on him and on him alone. He has to earn it.”

OLY 1991: Abolition of wigs and Your Lordship

The ceremonial opening of the 1991 legal year marked the end of an era where tradition dictated a Supreme Court judge to be addressed in court as “My Lord” and “Your Lordship”. Wigs were also abolished from the court attire of judges, lawyers and Queen’s Counsel for all normal court proceedings.

One of Chief Justice Yong Pung How's first acts as head of the judiciary was abolishing wigs in court. But he still had to wear one as he made this announcement at the opening of the 1991 legal year.
Photo: Ministry of Information and the Arts Collection, courtesy of National Archives of Singapore

These changes were spearheaded by Chief Justice Yong Pung How, who in his first OLY speech declared, “They are considered inappropriate in the context of a sovereign republic and our egalitarian society… the eventual appointment of women as judges of Supreme Court will also require the continued use of the term ‘Mr Justice’ to be reconsidered.”

He ended his address by telling the court, “…in view of the decisions of the Council of Judges on Forms of Address, may I say on behalf of my brothers that ‘Their Lordships’ in their present form take leave of you for the last time, and look forward to meeting all of you again at the reception, and to being addressed socially as ‘judge’.”

In 1993, the audience at OLY was told of an imminent restructuring of the Supreme Court appeal system. A single court would replace the 3-judge Court of Appeal and the Court of Criminal appeal on which different judges sit at different times. Two High Court judges would be promoted and redesignated as Judges of Appeal, sitting with the Chief Justice of the day to hear all appeals. CJ Yong also announced that the Court of Appeal would eventually end all appeals to the Privy Council in London. “We cannot expect to continue this arrangement indefinitely.”

The phototaking of the Bench is a cherished OLY tradition that continues till this day. Here, the Bench is decked out in their new ceremonial robes, introduced at OLY 1995.
Photo: Singapore Academy of Law

1995 saw the Bench decked out in new ceremonial robes, as part of CJ Yong's drive to modernise the legal system. These robes were friendlier to Singapore's hot and humid climate and were also easier to maintain.

CJ Yong announced that the Senate of SAL would institute measures to select the first group of Senior Counsel. “Over the last few decades, our legal profession has grown in experience and expertise, and I think the time has come when we are ready to endorse those who are at the apex of the profession.”

Photographed at the Opening of Legal Year in 1997 were eight of the year's 15 new Senior Counsel appointees:

CJ Yong opened the legal year with proposals to drive efficiency in the management of the judicial process. From March of that year, all writs of summons or documents which initiate trials, court orders and judgments would have to be filed electronically.

“As Singapore becomes an international business and financial centre, the slowness of the court system should not be a drag on the country’s future development.”

“We plan to give all Judges and Judicial Commissioners and as many lawyers as possible some hands-on experience in conducting trials using electronic documents. This exposure will be necessary as it’s important to prepare them for the way in which all chamber hearings and open court trials will be conducted when our Electronic Filing System (EFS) is fully operational within the next two years.”

At the same time, then AG Chan Sek Keong announced that the AGC would put the entire database of statutes and subsidiary legislation on the government computer network, Intranet and eventually on the Internet.

OLY 2007: A new Chief Justice: A balance between justice delayed and justice hurried

The legal profession welcomed both a new Supreme Court building and a new Chief Justice after 16 years, when former AG Chan took the reins from CJ Yong, who had retired the previous year. Said CJ Chan, “Judges will continue to be proactive in managing the trial process to achieve optimal economy in the presentation of evidence, with due regard to the complexity of the case. No counsel will be hurried or harried in the presentation of his case."

Held a year into the Covid-19 pandemic, OLY 2021 will forever be remembered for capturing a unique moment in time. Gone were the affectionate handshakes and well wishes for the new year, replaced by masks and social distancing. The crowds were gone too, as the event was streamed from the Supreme Court, with half the Bench present in person and the other half dialling in remotely. Still, clever use of technology ensured that the grandeur of OLY proceedings was not lost on the audience. 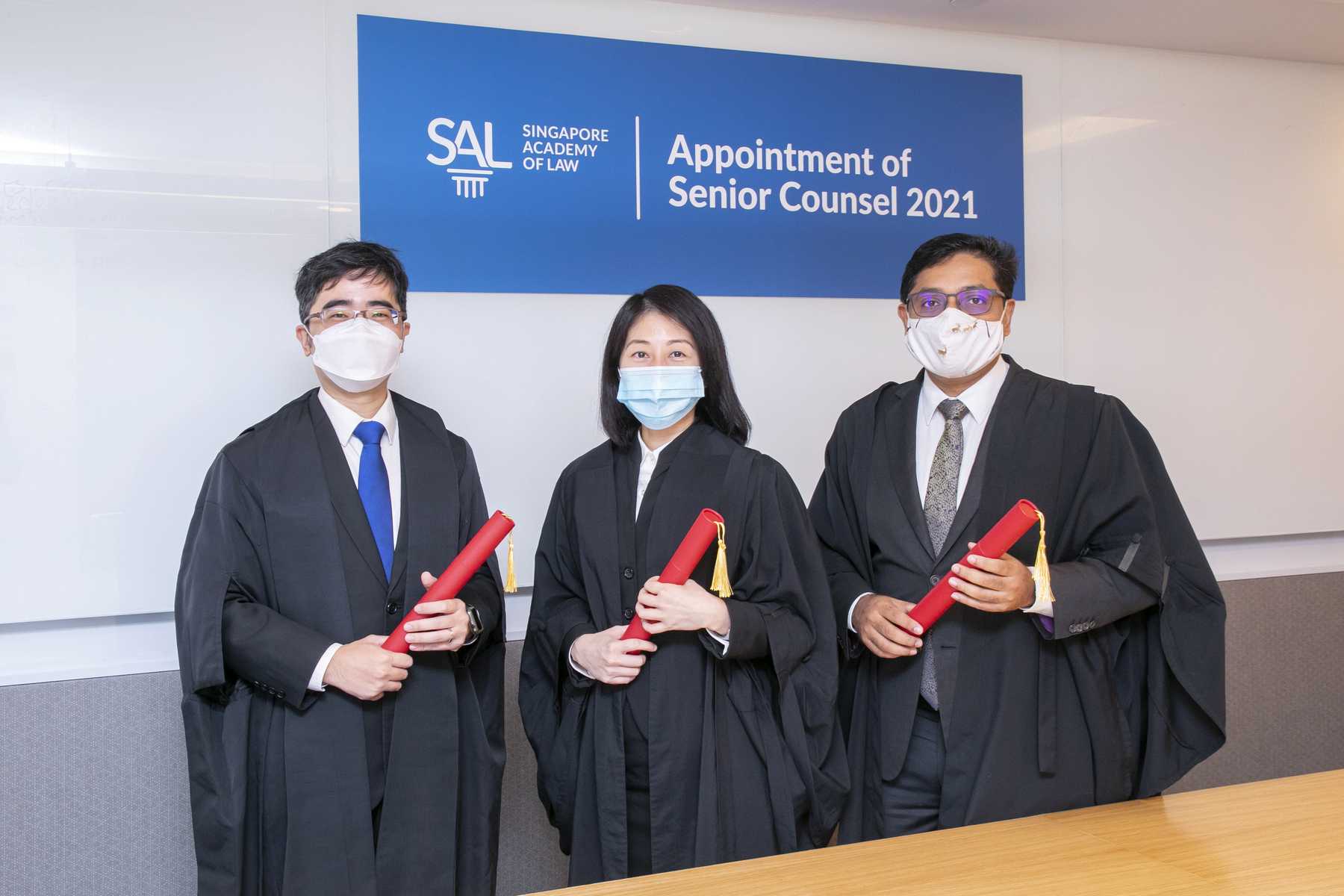 In 2022, Chief Justice Sundaresh Menon delivered his 10th OLY address, his second amid the Covid-19 pandemic. Here, he announced the restructuring of the Singapore Legal Service into two entities: the reconstituted Singapore Legal Service and the Singapore Judicial Service. “For those in the Judiciary, this presents the opportunity to go beyond the adjudication of disputes and embrace the vision of being a part of the national institution entrusted with the administration of justice,” he explained.

Chief Justice Sundaresh Menon will open the 2023 Legal Year at a ceremony on Monday, 9 January 2023.