A CLASS ACT: FROM CHALK TO TRANSPARENCIES

In the second of a two-part series on the history of the law faculty as told through oral history interviews, Professor Tan Sook Yee recalls her time at the university as lecturer and administrator. 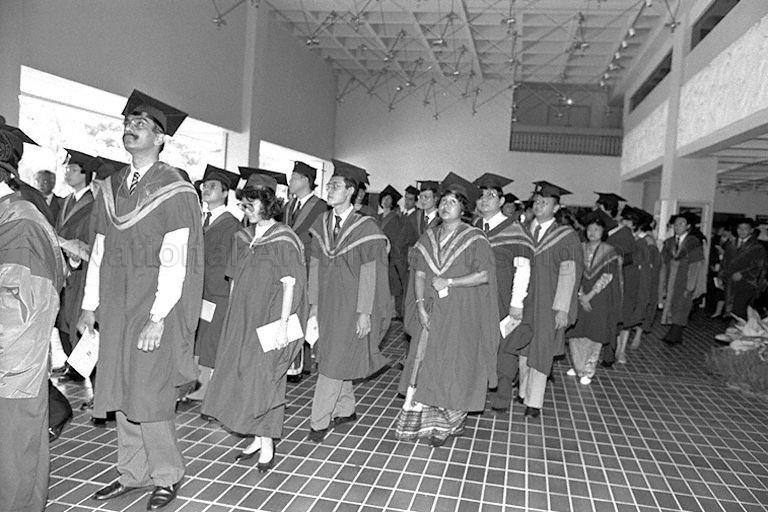 Professor Tan Sook Yee grew up in Seremban, Malaysia, studied law in Dublin, Ireland and would spend 45 years of her life lecturing at the law faculty in Singapore. Years after her retirement, she would see herself in her dreams conducting lectures and still “enjoying myself”.

In 1964, “A very serious-looking young man,” would pip her to the post of assistant lecturer at the law faculty. “It was [Prof] Jayakumar. We were vying for the same job. I learnt that later.” The university offered her a temporary position as an assistant lecturer on a one-year contract with a monthly salary of $800. “I didn’t ask for more. You were thankful to have a job in those days,” she recalled.

“I was new to Singapore. I had no connections here… I had no friends, I wasn’t in school here. So, the group in the faculty [was] very good. We had a great time. We all went out to lunch – the faculty in one car.”

“Everyone was young, everyone was learning.” With hardly any age gap between herself and her students—in fact, some of them were much older—Prof Tan recalled that her strategy was to be formidable. “Because I was intimidated, I became very intimidating.”

One of her former students, retired district judge Mr Rahim Jalil remembered that Prof Tan left an indelible impression. “She would be holding the classes and… she would just say things like, ‘Well, the person who is sitting there… wearing black clothes like me, this is the question that you have to answer.’”

In the pre-Internet days when primary legal materials were only available in print, Prof Tan remembers pencilling paragraphs from the law reports and sending them to the typing pool to be typed and printed on stencils for the students because “otherwise there would be mutilation in the library…”.

The only teaching aids were chalk and the blackboard. The Land Law lecturer remembers sketching little houses on the blackboard and the students would be giggling at the back. With the advent of transparencies, she recalled making a fool of herself quite often, “Putting something there and… nothing appeared and then those boys up there will be giggling.”

By the time she took over the deanship in 1980, the student intake had grown and the faculty had expanded to include both local and foreign teaching staff. One of her best achievements she recalled was being able to work with the band of differing personalities.  “Admin work is no fun… [and] chairing faculty meetings with all these warring groups is no fun.” And in a way, the same tactics that she used on her students helped. “Full of play-acting,” she laughs. “You pretend to lose your temper. You take off your glasses, and somehow they fell into line.”

“I enjoyed teaching actually. I enjoyed tutorials. I really enjoyed interacting with students,’’ said Prof Tan. And she is proud of the achievements of her students. They not only include members on the Bench but people who have made their mark overseas. “Students that you didn’t think could have done so well have done very, very well. Very plucky… going to work in the United Nations and in Geneva… these women, they would go with a degree and not much else and make a success of themselves abroad. I think it was great. So it’s our graduates actually who gave us that reputation.”

The faculty ensured that this reputation was upheld by being extra strict in giving out first-class honours. “When you are a young faculty, you are unsure of yourself and you want to make sure that the people that graduate with first-class are really, really first-class otherwise other places will think that you are a banana kind of university.”

For someone who has given herself to generations of students, many of whom she counts as good friends today, her priority had always been her family. “That was number one. I never intended to have a career as such. I knew I would be working… to keep myself occupied and to have some extra money for myself. That’s just what I wanted. But everything that happened to me was imposed on me. I just did it.”

Read the first part in this series here.

Professor Tan Sook Yee Yee joined the then University of Singapore on 1 May 1964 as an assistant lecturer at the Faculty of Law. She served as Vice Dean during Mr S. Jayakumar’s deanship before taking up the office of Dean and serving two terms with distinction from 1980-1987. Her name is synonymous with Singapore land law. Her book, Principles of Singapore Land Law, published in 1994 has been hailed as a milestone among legal texts in Singapore.