These days, we are constantly reminded of the need for resilience and fortitude in the face of Covid-19.  For veteran lawyers Mr TPB Menon and Mr Sat Pal Khattar, it did not take a global pandemic to turn their lives upside down.  At an age when most of their peers were focused on their studies, they had to shoulder the added responsibility of being head of their households while grappling with the demands of law school. Their stories, taken from excerpts of their oral history interviews with SAL, are inspirational in these difficult times.

Mr TPB Menon was studying for his HSC (Higher School Certificate, equivalent to today’s A’ levels) when his father was diagnosed with cancer. “The doctor told me, your father has only got three months to live…I didn’t tell my mum. I think it would have finished her.”

Within six months of his father’s passing, the family had to vacate the staff quarters at the Bukit Timah campus where the elder Mr Menon had been Supervisor of Works at Raffles College. They would live in rented premises for two years before Mr Menon purchased a $19,000 semi-detached house with money left from his father’s university provident fund.  “The first day we moved in, we only had a footstool and we all had to sit on the floor.”

At just 19, Mr Menon became head of the household. “My mother was only 37,” and he had three other younger siblings. “I don’t know how I did it. I didn’t fall sick but I was very, very thin.” He would wake up at 5am, drive his siblings to school, do the marketing on his way back before heading home to change and go to university. At 12.30pm, he would pick his siblings from school, go home for lunch and then he was back at university for lectures in the evenings and studies at the library until 10pm. 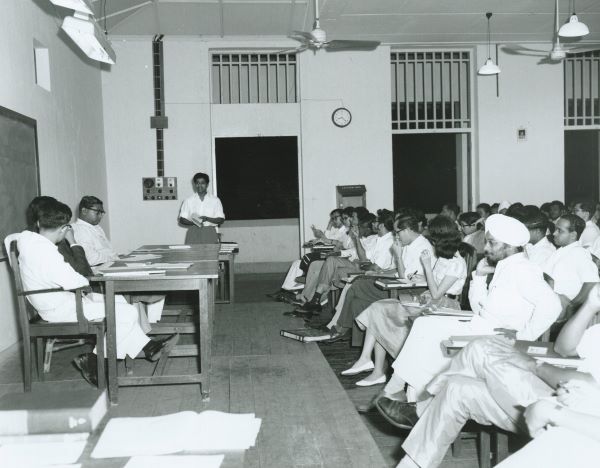 Above: The first batch of students at the University of Malaya Department of Law. Addressing the moot court is a young TPB Menon who later made his mark in trust litigation. Courtesy: Scales of Gold: 50 Years of Legal Education at the NUS Faculty of Law

The final year of law school was the hardest. “I had a heavy combination of subjects which meant that I had to work doubly hard.” But money was also running out. “My sister and brother were poised to go to university. So being the eldest, I had to worry about money which at that stage shouldn’t be the case… [At] night, I gave tuition and used to earn a little bit of money writing articles for [a friend at] The Straits Times.” Giving up was not an option; after all, Mr Menon recalled that it was his father’s dying wish that all the children complete their university studies.

Unlike Mr Menon, Mr Sat Pal Khattar’s father had no wish for his son to further his education beyond the Senior Cambridge (equivalent to today’s ‘O’ levels). “My father had decided that he needed help in his tiny business. And I had very little say. So I sold sports goods for my father, and travelled to all the smaller towns in Malaya, Sarawak, Brunei and Sabah.”

“When I wanted to do law, I had to discuss with him to say that I would need only about three hours a week off. I managed to persuade the faculty to put all my tutorials after office [hours]. But lectures were not arranged [that way] for me. So quite often I used to rush to a lecture [and] rush back and sell sports goods.” He would also spend his university holidays travelling to different parts of Malaysia for the business. “My obligation to the family business was unaffected by the fact that I was doing law,” said Mr Khattar, who lost his mother as a child. Just before his second-year exams, his father died of a massive heart attack. It was a double whammy for him. “The second-year exams were crucial because if you did not get through, you had to leave the faculty.”

Despite his father’s unexpected passing, Mr Khattar got the best results that year and even nabbed a book prize. Law studies aside, the young man was also saddled with the full responsibility of running his father’s business and looking after an extended family which included his grandmother, his sister, step-mother and her three children.

“Everybody was interested in getting the best [results] but I was more interested in getting a job because, for me, a job was the most important thing,” recalled Mr Menon. The convocation ceremony for this first batch of local law graduates was held in Kuala Lumpur but given their dwindling finances, his family couldn’t afford to attend. “My mother wanted to see her eldest son graduate but we couldn’t afford for all of us to stay in the hotel. So I had to go there all by myself.” 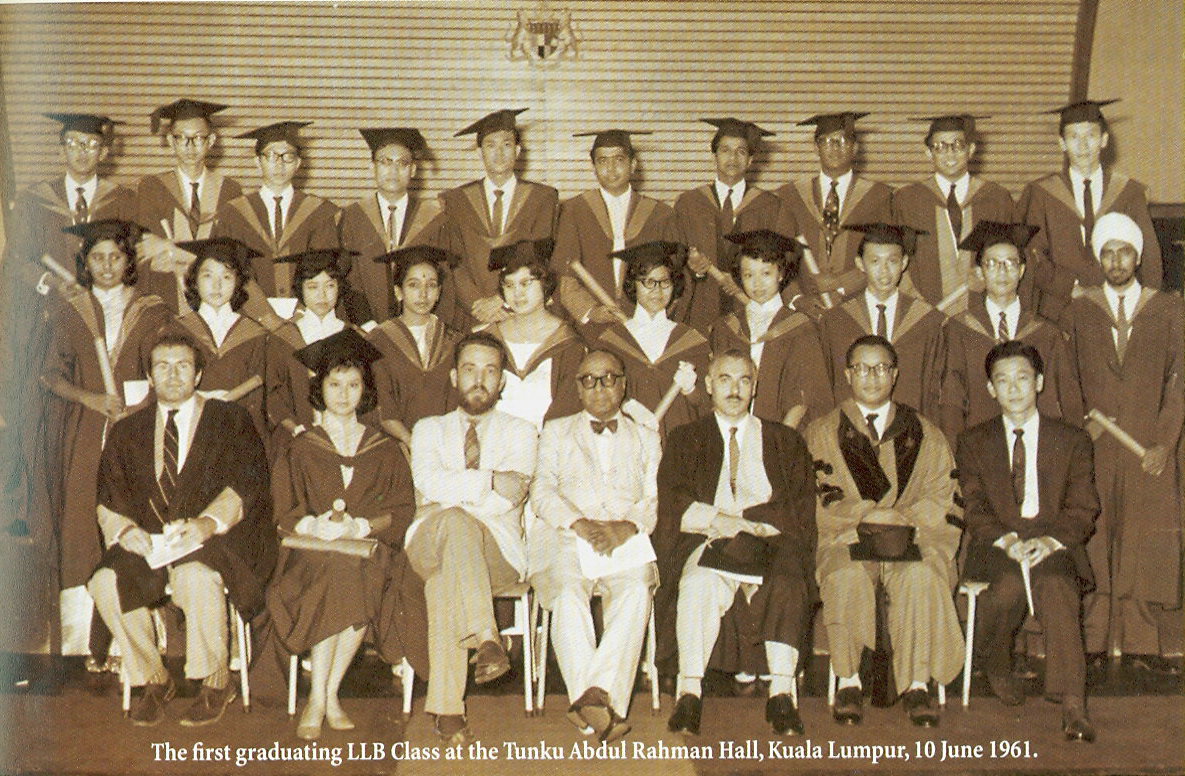 Above: Mr TPB Menon's graduation photo. He is standing in the last row, fourth from the right. Courtesy: Scales of Gold: 50 Years of Legal Education at the NUS Faculty of Law

THE DRAW OF THE LEGAL SERVICE

The Legal Service offered the best opportunity to get a job straight away after graduation. Unfortunately, Mr Menon recalled the day when he was told that his application was rejected. “It was my birthday… I even remember the shirt I wore.  It was a short-sleeved blue shirt with stripes. That was the blackest day, I thought it was a disaster.”

When he broke the news to this mother that he would not have a salary for another year, “I still remember the words my mother said.  She told me, ‘Son, when one door closes, there’s always another window that opens.’”

Mr Eric Choa opened that window for Mr Menon when he agreed to take him as a pupil for six months on the condition that there will be no pay and that he would have to leave at the end of the period.  However, after just three months, Mr Choa offered Mr Menon a job at his firm. Despite getting offers of higher pay later, Mr Menon chose to remain with Mr Choa who would eventually pass him the firm, making him a sole proprietor at a relatively young age.  “I thought to myself and I said, ‘What is more important? Is money more important or my relationship with Eric Choa who has taught me the ropes?’”

Unlike Mr Menon, Mr Khattar was not eager for a job in the Legal Service. He was earning a comfortable income from his family’s sports goods business and he had no intention of practising law. “I wanted to go back to university to become a graduate assistant.”

At the behest of Dr Bashir Mallal, who chided him for wasting his legal education, Mr Khattar decided to join the Legal Service and was appointed a DPP and State Counsel doing criminal work. “I hated it. I was not made for a career prosecuting criminals and murders and rape and stuff like that.” 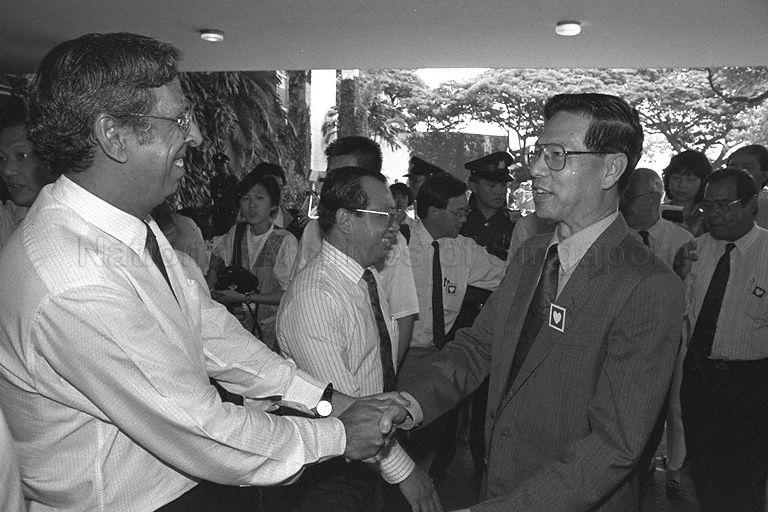 Above: Presidential candidate Ong Teng Cheong being greeted by lawyer Sat Pal Khattar at Singapore Conference Hall on nomination day for the first presidential election in 1993. Ministry of Information and the Arts Collection, courtesy of National Archives of Singapore

So when a vacancy in the tax department came up, Mr Khattar decided to make the switch; one that would change his entire career. Within seven years, he would rise to the rank of a superscale officer at an early age of 30. “I was the envy of a lot of people in the Legal Service because nobody below 30 ever got a superscale.  But after a while, I decided that I didn’t want to remain a civil servant all my life.”

He left the Legal Service to start a one-man practice, Sat Pal Khattar and Company on 1 July 1974. About 15 months later, his classmate Dr David Wong joined him and Khattar-Wong & Partners was born.

Mr Khattar attributes much of his success to what he calls ‘accidents’.” It was accidental that after I started practice… Graham Hill [who] was not only the leading lawyer in the tax field but the leading civil lawyer in Singapore... ran into some problems… and he gave up practice and went back to the UK. So suddenly, I was a tax practitioner with no other person to compete with, and I had a lion’s share of the tax work from the multinationals as well as from the local community.”

Mr TPB Menon was among the pioneer batch of 22 law students who graduated from Singapore’s first law faculty in 1961. His former classmate Chan Sek Keong describes him as “the most experienced property and trust lawyer in private practice”.  Mr Menon was senior partner of Oehlers & Choa before it merged with Wee Swee Teow LLP in 1989. He was senior partner of Wee Swee Teow LLP from 1989 to 2000 and is now a Consultant at the firm. He was President of Law Society from 1980-83 and was awarded the Society’s highest honour – the CC Tan Award in 2004. Listen to his interview here.

Mr Sat Pal Khattar graduated with an Honours degree in Law from the University of Singapore in 1966 and started his career as a Deputy Public Prosecutor and State Counsel at the Attorney General's Office. This was followed by a shift to the Inland Revenue Office as a Legal Officer. He founded Khattar Wong & Partners, one of the largest law firms in Singapore. After retiring from law practice in 2000, he established Khattar Holding, a private investment firm. Since the early 1990s, Mr Khattar has been investing in India, and this experience has helped him promote and support bilateral trade and investments between Singapore and India. He has served on many civic bodies in Singapore in various capacities and has been honoured at the May Day Awards on several occasions. He was the first resident in Singapore to receive the Padma Shri Award from the Indian government. Listen to his interview here.